Mainly found in temperate and subtropical regions of the Northern Hemisphere, the oak tree has an average lifespan of over 200 years. Facts and Curiosities

What is the cork oak?

The cork oak is an evergreen tree, of the Fagaceae family (Quercus suber), to which the chestnut and oak tree also belong. There are 465 species of Quercus, mainly found in temperate and subtropical regions of the Northern Hemisphere. Cork is harvested from the Quercus suber L species.

How do cork oaks grow?

The cork oak may be sown, planted or propagate spontaneously, which is often the case in cork oak forests, thanks to the acorns that fall on the ground.

What are the ideal growing conditions for the cork oak?

How long does a cork oak live?

A cork oak has an average lifespan of over 200 years.

Which is the largest and oldest cork oak in the world?

The oldest and most productive cork oak in the world is the Whistler Tree, in Águas de Moura, in the Alentejo region (South of Portugal).

The cork oak was planted in 1783, stands over 14 metres tall and the diameter of its trunk is 4.15 metres. Its name comes from the noise made by the numerous songbirds that shelter among its branches. Since 1820, it has been harvested over twenty times. Its 1991 harvest produced 1200 kg of cork, more than most cork oaks yield in a lifetime. This single harvest produced over one hundred thousand cork stoppers.

Stripping is the ancient process of extracting the bark of the cork oak - the cork. Today, this work is still done by specialised professionals, with absolute precision, who use just a single tool: the axe. This delicate operation takes place between May and August, when the tree is at its most active time of growth and it is easier to remove the bark from the trunk.

When does the first stripping take place?

The first stripping takes place when the cork oak is 25 years old and the trunk has reached a diameter of 70 centimetres, measured 1.3 metres from the ground. Subsequent stripping take place with an interval of at least nine years.

Intervals of at least nine years, which means that the harvesting of the cork will last 150 years, on average.
The first stripping is called "desboia" from which the virgin cork is obtained, which has a highly irregular structure and hardness that make it difficult to process.
Nine years later, when the second stripping takes place, the cork, known as "secundeira", has a regular structure which is not as hard.

The cork from these first two harvests is not fit for the manufacture of stoppers and thus used in other applications for insulation, flooring, decorative items, among others.
From the third and following strippings the "amadia" or reproduction cork is obtained. Only this cork has a regular structure, with a flat front and back and the ideal characteristics for the production of natural, quality cork stoppers.

Is the cork used immediately after being stripped from the cork oak?

No. After stripping, the planks are stacked into piles in appropriate structures and shall remain outdoors for at least six months for the cork to stabilise. This process is governed by the strict compliance of the Code of Cork Manufacturer Practices.

Does the cork oak need to be cut down to harvest the cork?

No. Stripping is carried out manually and the trees are never cut down. After each stripping, the cork oak undergoes an original process of self-regeneration of the bark, which gives the activity of cork harvesting a uniquely sustainable nature.

Besides cork, what other parts of the cork oak are used and for which purpose?

Nothing is wasted from the cork oak, all its components have a useful ecological or economic purpose:
• The acorn, which is the fruit of the cork oak, is used to propagate the species, as animal fodder and in the manufacture of cooking oils;
• The leaves are used as fodder and a natural fertiliser;
• The material from tree pruning and decrepit trees provide firewood and charcoal;
• The tannins and natural acids contained within the wood from the tree are used in chemical and beauty products.

What was the significance of the cork oak in Ancient Greece?

In Ancient Greece, cork oaks were revered as the symbol of Freedom and Honour. Thus, only priests had permission to cut them down.

Yes. Some scholars argue that the existence of cork oaks dates back over 60 million years. It has been scientifically proven that cork oaks survived the ice age in the Mediterranean Basin, over 25 million years ago. In Portugal, where the largest cork oak forest area in the world is found, a fossil fragment over ten million years old was discovered which is testament to the ancient existence of this tree in the country.

At the end of 2011, the cork oak was unanimously established as Portugal's National Tree. This classification is directly related to the economic, social and environmental performance that it represents to the country. Around 23% of Portugal's forest area is made up of cork oaks, which support the country's main industry, besides providing a fundamental contribution against social desertification and making an unparalleled contribution to the preservation of the biodiversity associated with the cork oak forest.
The cork oak's importance in Portugal has been recognised since the 13th century, a time when the first laws arose for the protection of the species.

With over 2.2 million hectares of cork forest, about one third (approximately 730 000 hectares) is situated in Portugal. 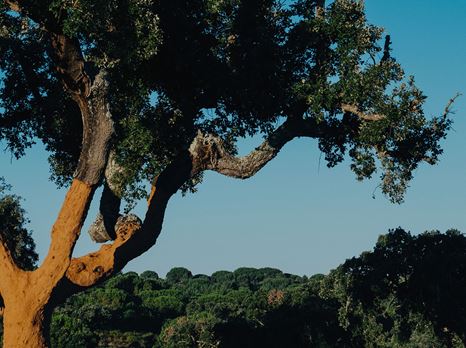