What's the impact of a cork composite solution in transportation applications, used in interior floors of passenger railway carriages?

The Alucork® floor is a lightweight composite structure composed of a sandwich panel with a CorecorkTM core, resulting in an appreciable weight reduction compared to current technology plywood panels and an improved noise and thermal insulation performance.

Reduction of costs in the transport industry

The Amorim Cork Composites, business unit of the Amorim Group, is committed to the development and manufacture of technical, environmentally friendly products based on cork, for numerous industries and applications.  The rail industry is one of the strategic segments of the company, where innovation and creativity in the search for solutions is a constant factor.

The weight reduction of railway carriages, as with all models of mobility, is crucial to energy consumption. The increasing number of requirements in terms of passenger safety and comfort as well as operating efficiency have been a long-standing factor.

Requirements such as the incorporation of HVAC systems, noise reduction, increasing thermal insulation, versatility of the structures and safety regulations for collision structures normally have a common impact: a gain in weight.

The energetic cost of the increase of the weight, both downstream in the supply chain, supported by the operator due to higher energy consumption, as well as upstream, in the manufacture of raw materials/materials and assembly of components and equipment, is the main driver of the use of composite structures which, being lighter, more sustainable and of longer durability, have a positive effect on reducing the total cost of the solution.

When Amorim Cork Composites added cork and rubber as the core material applied to sandwich wood panels (CPA - acoustic plywood) this was an innovative solution to reduce noise and vibration in interior floors for trains.

The combination of viscoelastic material (such as cork) in a sandwich panel contributes greatly to a reduction in weight and good acoustic performance.

The use of wood panels (CP - plywood and CPA - acoustic plywood) in the manufacture of indoor floors remains the dominant technology.

The new Alucork® floor, composed of a combination of a CorecorkTM core (lightweight cork agglomerate composite) with aluminium alloy skins coating each side, has taken the lead in lightweight solutions with a lower total cost available to the industry. Chart 1 shows this fact, where the Alucork® weight is substantially lower (8.6kg/m2 for Alucork® 20mm) than typical plywood and acoustic plywood solutions of comparable thicknesses. 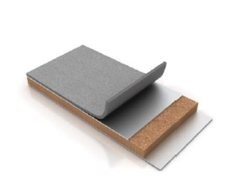 The Alucork® floor has a total standardized thickness of 20mm. This, however, is adaptable by modifying the thickness of the CorecorkTM core and, in specific cases, the thickness of the aluminium coating in order to accommodate the unique needs of each project, either in terms of structural and dimensional requirements or thermal and acoustic insulation. The final floor is a modular construction through the interconnection of the different Alucork® panels, which in turn is coupled to the carriage structure.

Aluminium alloy profiles  are attached to the Alucork® panels at the time of its construction, according to the individual assessment of the needs of each project. These serve as the substrate for the mechanical coupling between panels, permitting the fastening of benches, tables, partitions, rods, technical cabinets and others, thus guaranteeing the necessary structural reinforcement for connections with larger stresses and conferring the continuity of the surface, levelling and the absence of visible seams on the final surface.

The incorporation of profiles in the panels is not just for the mechanical interconnection of the various panels that make up the floor and to meet fastening requirements. They are also applied to the side faces of end panels so as to ensure the peripheral sealing of the system, maximizing protection against moisture, water, lubricants, cleaning agents and other substances foreign to the system, thereby promoting the overall durability of the system. Tests performed on this configuration attest to its efficacy in dimensional stability and retention of the mechanical characteristics as well as the absence of fungal growth in high humidity environments.

The custom and modularity design of the Alucork® panels guarantee the correct assembly and alignment of the floor as a whole, presenting a substantial improvement to efficiency in the assembly time of the final floor and respective components.

Excellent bending with distributed load and resistance to concentrated loads

The scope of the summary characterisation is intended to highlight the performance in terms of safety, comfort and durability of Alucork® panels.

The basis of the characterisation is a 20mm Alucork® panel and the typical requirements of end users, such as the national and international rules governing the passenger rail transport sector.

The mechanical characterisation is an integral part of any system subjected to static loads and the structural requirements arising from that. The performance of floors in relation to bending and indentation is particularly important due to the dynamic loads from the movement and distribution of passengers and goods in the carriage. The bending resistance values of the AluCORK® panel (concentrated and distributed load) and its respective modulus are within those expected for this characteristic.

The values of the flexural modulus as well as bending performance under distributed load (through progressive loading of the panel across its surface) are always according to the boundary conditions; the distance between supports that bear the carriage floor may be adjusted. The increase of the CorecorkTM core allows the desired deflection to be controlled, representative of bending under distributed load .

The maintenance and operability of the floor surface are synonymous with its durability. It has to resist impact or concentrated load stresses caused by fastening elements, or possibly by extraordinary operating situations.

The impact resistance is measured by the indentation caused on the surface by the fall of a steel ball with a mass of 500g and 50mm in diameter , from a height of 1 and 2 metres above the panel. It is tested without any finishing of the final floor, and has a maximum permissible value of 1.0mm and 2.0mm respectively. The values obtained are in accordance with these requirements. As for resistance to concentrated loads, the indentation is obtained by applying loads of 1.0kN 1.5kN to the area corresponding to a circle of 6 mm in diameter, causing surface stresses in the region of 35MPa and 53MPa. The maximum performance requirements for indentation from a concentrated load are between 0.5mm and 1.0mm for said loads, which shows the Alucork® panel comfortably complies.

Comfort is an important long-standing factor in rail transport. A thermally comfortable environment and the absence of disturbing noises are crucial for those choosing this means of transport.

While temperature is controlled through active systems (forced air conditioning), its efficiency is affected by the insulation characteristics of the materials composing the structure of the carriage in contact with the outside, as a direct impact on operating costs. The thermal performance of the base configuration of 20mm Alucork®, measured by thermal conductivity is positioned an order of magnitude lower compared to a plywood solution with the typical value of 0.14W / mºC. This means the losses or gains of heat with the outside through the carriage floor are significantly decreased.

The fire performance of the materials in the railway scenario may have one or more functions in order to preserve, ultimately, the safety and lives of the occupants. Its role to contain the spread of fire and the consequent heat (intensity) and smoke (opacity and toxicity) should permit safe access to evacuation routes in case of fire, preventing the anticipated overall collapse of the structure.In the same way, the sound coming from outside the carriage (of structural origin propagated by vibration or air) largely depend on passive systems, as is characteristic of the sound insulation of materials. The sound coming from outside the carriage, essentially through the interaction between the wheel and the rail and the aerodynamic noise produced by the moving train (through the flow of turbulent air) may be reduced by a floor with good acoustic performance. However, this is only one component among several to be taken into account in reducing the noise inside the car through the floor. The airborne sound insulation values obtained by the 20mm Alucork® panel are 30dB are higher than the plywood ones (CP) of equivalent thicknesses, but slightly less than those of acoustic plywood (CPA). However, in the overall evaluation, acoustic insulation per unit mass (dB/kg) is significantly higher in the case of Alucork® panel, making this choice the most efficient.

The most recent reference standard in Europe that addresses the fire performance of materials and components in railway vehicles (EN45545-2) will replace all national European standards from 2016. This standard classifies the vehicles according to the level of risk (low - HL1 / HL2 / HL3 - highest) thus establishing the requirements. It classifies all the material on board into groups and assigns to them the relevant requirements, specifying the methods, conditions and their fire performance. The floors correspond to the R10 class of requirements, where Alucork® is classified according to the highest level in terms of exigency, HL3.

The technical advantages of Alucork® composite, due to its wide possibility of customization and modular design, allow for unparalleled performance across the value chain, from manufacture to operation. The unique characteristics that each material gives the composite are an example of how such different materials like cork and aluminium can be combined in order to contribute their unique characteristics for an overall performance and exacting standards like those existing in public transport by rail.