The new design object from the MATERIA collection. News

Stow It: An object that combines design and functionality.

Stow It is a multi-functional wall shelf which combines stylish design with acoustic properties. Stow It was designed by the renowned designer James Irvine, who previously designed Six, for the Materia collection.

Born in London, James Irvine graduated in 1984 from the Royal College of Art, London. In the same year he moved to Milan. From 1984 to 1992, he was a design consultant for Olivetti design studio Milan, under the direction of Michele De Lucchi and Ettore Sottsass. In 1987 he worked for one year at the Toshiba Design Centre in Tokyo. He returned to Milan in 1988 and opened his private design studio. His first clients were Cappellini and SCP. From 1993 to 1997, in parallel to his private studio, he was a partner of Sottsass Associati, responsible for the studio's industrial design group. In 2004 he was the guest of honour at the design biennale, Interieur, in Kortrijk and was also elected Royal Designer for Industry by the Royal Society of Arts, in London. In 2007 he was awarded an Honorary Doctorate in Design from Kingston University. His design studio in Milan has worked and works with various internationally renowned companies including Alias, Arper, Artemide, B&B Italia, Canon, Magis, MDF Italia, Mercedes Benz, Muji, Olivari, Olivetti, Offecct, Phaidon, Thonet, WMF and Zumtobel. Today, Studio Irvine is run by his partner Marialaura Rossiello Irvine and now, as in the past, is always ready to take up new challenges. www.studio-irvine.com

By combining cork’s unique personality and sensory characteristics with a challenging design perspective, MATERIA is a collection of objects that fluidly and functionally fit into any contemporary environment and experience. Curated by experimentadesign, the collection is designed by 12 international designers and studios.

Reusable and biodegradable, cork is one of the world’s most versatile and sustainable raw materials. Impermeable to liquids and gases, cork is elastic, compressible, hypoallergenic, highly resistant, lightweight and floats in water. Cork’s potential as a leading raw material for the 21st century is only now beginning to be realised, thanks to significant R&D advances which are paving the way to new technical possibilities and ingenious applications. Corticeira Amorim - the world’s leading cork producer - stands at the forefront of this dynamic innovation process. 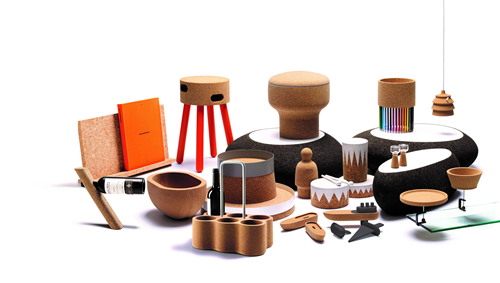