Studio Corkinho is an Antwerp-based design studio, run by two young designers - Cedric Etienne and Klas Dalquist – whose company motto is “It's cork, but not as you know it.” In this interview, Cedric and Klas explain why they decided to channel their energies into producing innovative products with cork and their plans for the immediate future.

Your work is all about cork? Why cork?

Cédric: It's about cork, but not as you know it. Working with the perception of how people look at cork to create a renewed awareness of its richness. Cork is a unique material, but it's mainly used in similar applications - for interior or decorative use. We want to ennoble it, give it an artful touch, by taking advantage of its unique properties, and creating a raw, bold, massive aesthetic language.

Klas: I love cork’s warmth and natural feeling – then we try to surprise people with what you can do with such an ancient and authentic product.

Cork has so many positive values, it’s almost impossible not to like it as a raw material...but we think we can bring so much more by making objects from cork. We want to cherish and build awareness about something we believe has earned the right to be treated with respect and yet also handled playfully.

At Studio Corkinho we don’t want to change the starting point, but by adopting a modern and more artistic approach we try to create a new legacy, that can transport this amazing raw material to a new century – and forge a new history.

What distinguishes cork from other natural materials? Which characteristics do you most value?

Cédric: Its texture and touch. We want to push forward the boundaries of cork and challenge its inner properties.

Klas: Its lightness, not only in terms of its weight but also its subtle touch and gentle attitude…it’s as if cork was there, hidden, quiet and kind - just waiting to be shaped into something.

It’s very similar to wood, it has that warm and earthy feel - it’s simultaneously different but very familiar.

We’re also constantly discovering new ways to play with it. There so much more to explore in terms of how to use cork – it feels as if we’ve just begun and that’s very exciting when you work as a creative person – venturing into the unknown with endless possibilities.

It’s also an amazing product to combine with other materials, by simply placing them next to each other, for example the contrast between burnt cork and matte brass is beautiful.

“Its lightness, not only in terms of its weight but also its subtle touch and gentle attitude”

Why is cork so attractive when it comes to furnishings?

Cédric: First of all because of its natural appearance. Use of cork composites inspires us to adopt a straightforward contemporary language.

Klas: Because it’s so familiar…it feels like home already.

What do you think about cork molding techniques?

Cédric: These will help the material explore new applications.

Klas: I think this is a key factor to creating new business options, and I believe this is the most interesting innovation for cork, especially for Studio Corkinho.

Birth – that’s the name of your latest project, which recounts your experience during the cork harvest in Portugal. Why did you come up with this idea?

Cédric: The idea for BIRTH actually came about when we experienced the cork harvest. We wanted to show the invisible side to cork culture. Most people who want to work with us don't really know where cork comes from, or how it's made. We wanted to pay tribute to the farmers and the artisanal nature of the harvest. So we spent several days at the cork harvest, writing down our impressions and then molded them into our journal, entitled BIRTH.

Klas: Since this is the beginning of Studio Corkinho and is our first collection, it made perfect sense to deliver a poetic message about how and where our core inspiration comes from - the cork harvest in Portugal is the first step in the process.

This is a natural and key starting point – there needs to be a birth before you can build something great.

After the birth comes the possibilities to start shaping things, but we must understand our birth, where we come from - to be able to tell a story we need a starting point, a beautiful birth.

Cédric: It’s a world of inspiration. A unique process that feeds so many industries. With so many diverse applications. And all this just from the cork oak tree. 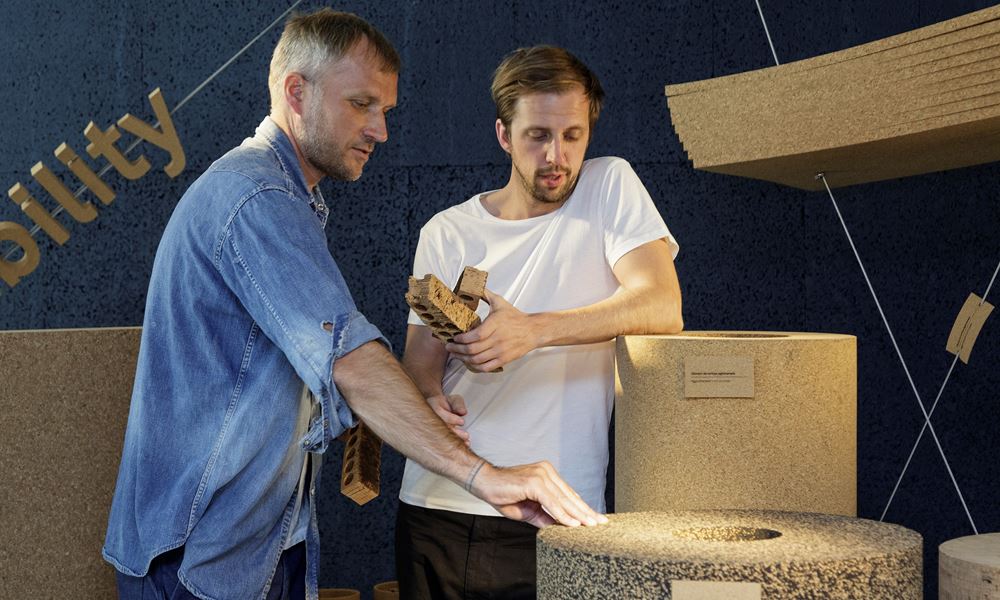 Cédric: It’s a world of inspiration. A unique process that feeds so many industries. With so many diverse applications. And all this just from the cork oak tree.

What's next? What projects do you have in mind?

Cédric: Our next collection is called MOTHER. To step back to what Mother Earth offers us. A series of abstract shapes, based on the circle, symbolizing the infinite cycle of "cradle to cradle". We share shapes, inspire moods ... and the end users determine the final destination.

Klas: To work hard on how to implement cork as a material used in public spaces, we want to explore how we can reveal the “red thread of fate”, by linking the mind with objects and generating interest in more collections from Corkinho.

We’re involved in new projects as a design studio and are using cork as a new element in architectural constructions. We will continue with vernissages of Birth and organizing open talks as a source of inspiration, to blow people’s minds with new shapes and surfaces.

Would you say that you aim to be cork ambassadors? Why?

Cédric: Absolutely, we feel like ambassadors! In addition to creating collections, we go to universities and art schools to give workshops about cork.

There's an important message within this material. A message that inspires innovation, a future way of living. To combine it with other materials in the context of contemporary interiors.

Our dream is to have our own farm one day. A guesthouse, where we can welcome visitors in an artistic residency, where we will create an inspiring atmosphere. Let's hope this dream will one day come true...

Klas: Because we’re already living it.

The studio recycles cork waste to produce original new product ranges, including flower vases, bowls, "vide poches", placemats and many other 100% natural and organic interior design objects. The goal is achieve a strong connection between nature, the object, interior design and architecture.

In addition to 100% cork-based products, the studio recently launched a book “Birth”, inspired by the designers’ experiences of the cork harvest in Portugal.